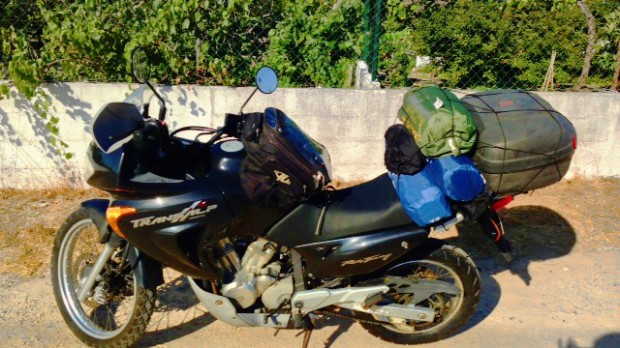 10h00 I am leaving home, in Palmela, Portugal, but I’m yet to decide where to go. Away from the shore, that’s for sure. Temperature is exceptionally high, even for the season – above 40 degrees, which prompted a kind alert from the cab driver who took me yesterday to fetch my bike (say hello to my Transalp, at my faithful service over the past 13 years).

On my way north, I stopped at Almeirim, not far from Santarem, the capital of the Gothic. Apologizes to those who live in Almeirim, but the town does not have much to say for itself apart from a famous “sopa de pedra”, a delicacy brought to us by a telling story (people say it actually happened, but that is out of the point now). The story goes like this: once upon a time, a monk who was to humble to beg came out with an ingenious strategy to bring up one’s generosity. He picked up a mug, filled it with a stone, and then he asked the first person he met whether it would possible to add a potato, a carrot; anything would go, as long as the soup would gather momentum (who would deny help in the face of a monk, surely upset by the delirious effects of hunger?) Off he went, door after door, a bit of salt here, a much needed sausage there, and so forth. By the end of the day, he had the best soup in the region. If you stop at the restaurant “Sopa de Pedra”, the stone will be there, right inside your soup, and it is bound to be last thing remaining, cos everything else will have been eaten, and for five euros.

Yet, no pleasure comes without a price. The Christians talk of penitence, the Hindus of karma. I rather blame on the beans. By the time I hit the road, they are already doing its thing, powered up by the above mentioned 40 degrees. It definitely made me skip the city of Tomar – a Graal for Templar fan(atics) across Europe. Not for me! In no time I was off the highway, heading for the for the first junky place I could find; and I will spare you the details.

A quick look at my maps app is more than enough to spot the place to go. I focused on the blue areas, and was attracted by the river Zézere. In no time I find a precious clue: Parque de Campismo da Foz de Alge, a real temptation, judging from a few photos at the website.

The safest way to get to Foz de Alge is via Figueiró dos Vinhos. From there, it’s not more than 9 km always on solid ground, with a spacy road. The same is not be said if you try the alternative, which looks really attractive for someone driving from the South, which is my case. The road, as I will soon find out, is a bit tricky, but it pays for the sake of the lovely path, all across the mountains alongside the river. Besides, it saves me up to 100 km, which is what one would have to travel to reach Figueiró dos Vinhos, up to the north.

Looking at the map below you’ll have a snapshot of the this alternative road (red), which is reachable leaving the A13 highway on the way out to Arega, some milles after Ferreira do Zézere.

All content in this site is copyright  © Carlos Catalao