I am staying in Berlin in a quiet area, not far from Alexander Platz. This is Choriner Strasse 81, and I soon realise that the apartment had once been home to a family who had the misfortune of living in Berlin under nazi rule. Right by the door, I noticed a frequent homage that one can literally stubble upon all over Berlin: the stumbling stones [Stolpersteine, in German] project of the artist Gunter Demnig. My search for the memory of this family led me to the project website, where photos, letters and other original sources can be found. 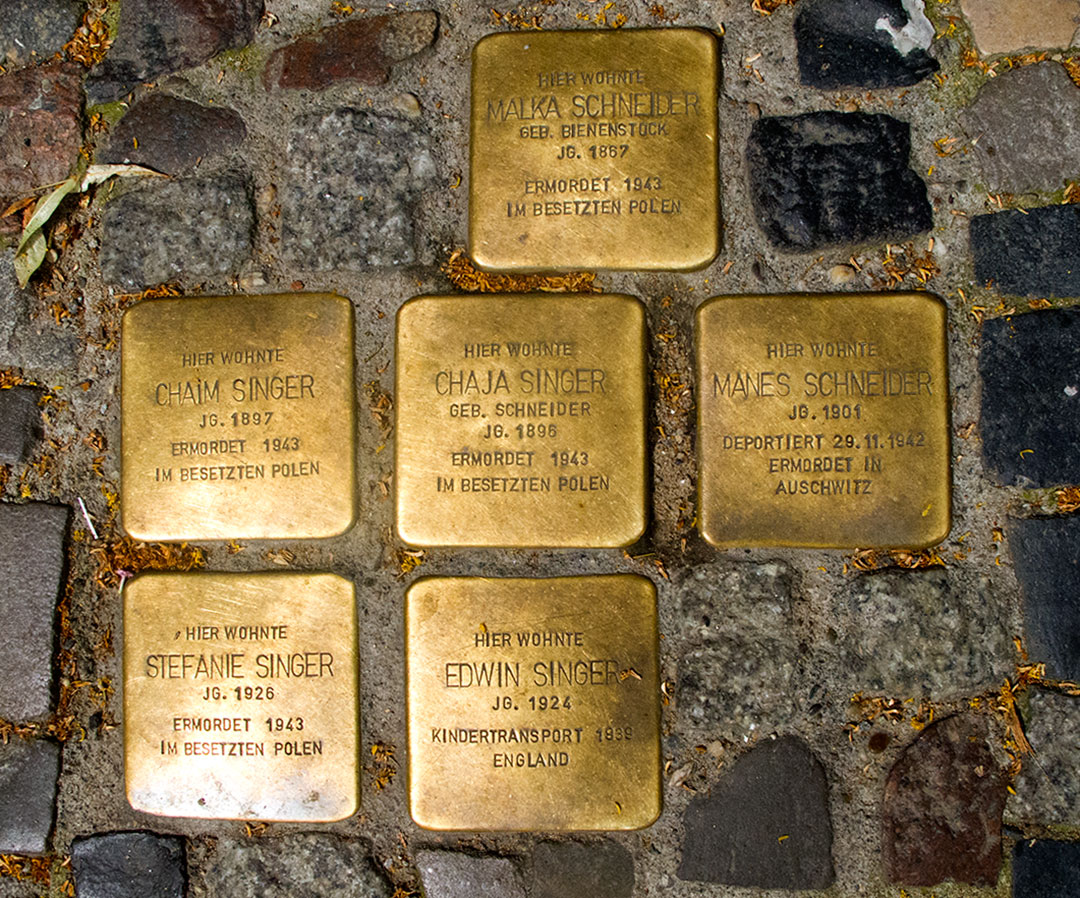 The text that follows is my own (poor) translation from German. Photos are from © Martin Keune, except for the first one, which I took myself, this morning, the 29th June 2016:

In 1912, Salomon Schneider (1.8.1867) left Chrzanow, a city to the west of Krakow, with his family. He moves into Choriner Strass 3, to work for Josef Leinkauft, as a travel salesman, in an enterprise at Linkstrass 25. His request for naturalisation is rejected in 1920, although his family never spoke nothing different from German, even in Chrzanow. The justification was the reported annual income of 3.000 Mark – considered not a secure amount –, for “Eastern Jews” [Ostjuden] were not welcome in Berlin.

1916 was the year of the first “Judenzahlung” [Jewish Census][1], which soon became an hysterical search all the way to the border with Austria, which was then closed, and newcomers became concentration camp interns. (a term used as early as in 1920). Naturalisations were usually refused. “Is the candidate a desirable addition to the home population?” was part of the police registration form, and for Salomon Schneider the officer wrote a note: “Nein.” For the antisemitism of the Weimar Republic, “East Jews” were the main target. The life of the Schneiders become quite depressive. Two daughters (Aurelia, 1903-1963, and Hinda/Minka, 1907-1974) seek their fortune in England.

Malka Schneider
Chaja Singer with her children, Edwin and Stefanie, in Berlin, 1927
Edwin, when he was 14, together with his sister Stefanie Singer, 12
Source [Stolpersteine in Berlin] © Martin Keune

National Socialism turned Antisemitism into a political goal and, since 1933, puts an end to the cultural, economic and social life of the Jews, with regulatory prohibitions and immediate violence. Both the Singers and Schneiders underdstand that this is a matter off life or death. In November 1938 British Jews and Quakers convince their government to rescue, at least, the jewish children from Germany. Entry in England was allowed whenever a patron or a host family could be found. Over 10.000 of these children leave in September in the “Kindertransporten” [Children’s Transport][2] . On the 4th of July 1939, the 14 year-old Edwin sits on the train to Holland, and then on the ship to Harwich, England. But the Londoner aunts Aurelia and Hind can only take one child; or was that that the Berliner families had no money for Stephanie’s rescue trip?

But by the summer of 1942 they had been deported to Poland. Malka Schneiders’ only son, Manes, is reported as number 468 in the Transport List of the “23 East Transports”, in 29.11.1942, and reached the end of the journey in Auschwitz. The rest of the family met death in Skawina, only about 50 km distant from their birth place, Chrzanow.

Edwin Singer searches for them desperately, but unsuccessfully, for quite a long time. He underwent military basic training and came back to Berlin as British soldier in the “Pool of Interpreters”. Here he meets his future wife Ingeborg Huchthausen (1926-1997) and moves with her to Enfield, near London, where he dies in 1992.

[1] Judenzählung (German for “Jewish census”) was a measure instituted by the German Military High Command in October 1916, during the upheaval of World War I. Designed to confirm accusations of the lack of patriotism among German Jews, the census disproved the charges, but its results were not made public. However, its figures were leaked out, being published in an antisemitic brochure. The Jewish authorities, who themselves had compiled statistics which considerably exceeded the figures in the brochure, were not only denied access to the government archives but also informed by the Republican Minister of Defense that the contents of the antisemitic brochure were correct. In the atmosphere of growing antisemitism, many German Jews saw “the Great War” as an opportunity to prove their commitment to the German homeland. [source: Wikipedia]

[2] The Kindertransport (German for “children’s transport”) was an organised rescue effort that took place during the nine months prior to the outbreak of the Second World War. The United Kingdom took in nearly 10,000 predominantly Jewish children from Germany, Austria, Czechoslovakia, Poland, and the Free City of Danzig. [source: Wikipedia]

All content in this site is copyright  © Carlos Catalao